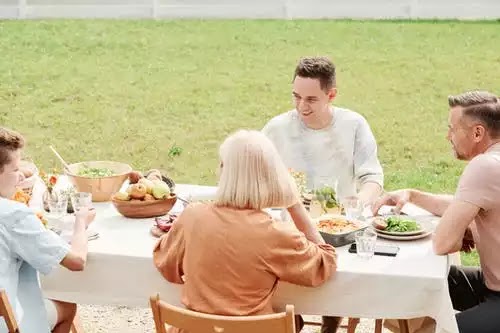 The six types of eating disorders One of the most common misconceptions about eating disorders are that they only affect women According to a survey conducted by Self magazine and the University of North Carolina, 65 percent of American women between the ages of 25 and 45 have reported taking part in unhealthy eating behaviors. However, roughly 1 in 3 men are also affected by this deadly psychological disorder.

At the age of twelve, I experienced an eating disorder that made me never look at food the same way. I was always a nervous child, but I had a heavy breakdown when I couldn’t keep up with all the changes thrown my way. I started middle school, and had trouble making new friends. That same year, my father also left to start a new career in another country. Everything spiraled out of control and soon my body began to reject food the way it rejected the harsh reality. Luckily, I’m a survivor of my eating disorder.

I learned not to let it define me, and neither should you if you’re currently going through a similar battle. The purpose of making THIS Article , is to inform others about eating disorders and break the stereotypes that make it hard to talk about.

Number One: Avoidant or restrictive food intake disorder According to Alina Petre, a registered dietitian, people with this kind of eating disorder under-eat due to a lack of interest in food, or intent distaste for how certain foods look, or smell, or taste. They may lose weight, or experience nutritional deficiency due to eating less than is necessary for maintaining a healthy diet I remember avoiding parties and other social events that would involve celebration meals. Eating in front of others was genuinely a painful process for me, so I’d hide in the girl’s bathroom during lunch period everyday until it was over.

Number Two: Anorexia Nervosa This is the type everyone usually first thinks of when they hear the term “eating disorder”. People with anorexia nervosa are obsessed with perfecting their body image. They like to remain in control by limiting the amount of calories they consume, to achieve their ideal body shape. Even when they are severely underweight, people with this disorder have a hard time recognizing it. Driven by their obsessive compulsive behaviors, they adapt distorted self perception and have dangerously high expectations.

Number Three: Bulimia Nervosa People with this type of eating disorder indulge in a large amount of food, and make themselves purge shortly after. Purging gives them a sense of relief, and similarly to anorexia nervousa, this helps them feel like they’re in control of their own bodies. It may be hard for others to spot those with bulimia nervousa, because they might be able to maintain a normal weight.

Number Four: Binge eating disorder People who binge eat, consume a large amount of food on a day to day basis. They often exceed the suggested daily calorie intake, and are usually overweight or obese. People with binge eating disorder often feel ashamed of themselves and do not feel in control of their bodies. If people with this type of disorder do not seek treatment, they can run the risk of developing heart disease and diabetees.

Number Five: Pica Pica is an eating disorder in which the individual consumes non-food items. Such as: rocks, paper, and hair. Although the causes of it are unknown, researchers hypothesize that it can be influenced by factors such as stress, developmental disorders, and low socio-economic status. Most often though, pica is reported alongside nutritional deficiency. Like any consumption of non-food items, pica has the risk of infections, and poisoning.

Number Six: Nocturnal sleep-related eating disorder This type of eating disorder occurs when individuals unknowingly eat in their sleep. They may roam in their kitchen cabinets and fridge, or eat straight in bed. According to Healthy Place, some people have reported eating strange combinations of food. Such as hot dogs dipped in peanut butter. This type of eating disorder affects one to three percent of the world’s general population. Have you experienced ANY of these disorders? Please share your story with us below, we want you to know that you’re not alone, and there are ways to seek treatment. In our description box below, We’ve provided some helpful sources for you If you have any specific topic requests you’d like to explore, please let us know as well with a comment.